Joanne Harris is, of course, a best-selling author in several genres. A couple of years ago, in her Joanne M. Harris guise, she published A Pocketful of Crows, based on Child Ballad 295 (the Child Ballads were collected in England and Scotland in the 19th century by Professor Francis Child). It was a powerful story of loss, revenge, realisation and empowerment, transformation -of many things.

Joanne Harris also has a very strong online presence, especially on Twitter, where she’s shown herself to be a wise woman indeed, and the instigator of #storytime, a form of digital storytelling that’s proved very incredibly popular. Out of that has come the Storytime Band, where she and three musicians bring those Twitter stories to the stage in a mix of tale, song, and instrumental work. They’ve played gigs for a while now, and already put out once CD with several of the short pieces.

Now Harris and band have brought several strands different strands of what she does together, offering a different take on A Pocketful of Crows as their new CD. It makes sense: the ballads are essentially stories, compressed into song form. They were intended to be sung in public, in the same manner that stories were told, and like stories, they changed a little with every performance. Story and ballads were both communal, much as #storytime is there for the digital community of Twitter. Harris is one of those rare writers who intuitively understands the power and history of ballads, oral storytelling and the folk tradition. The three are inextricably bound together. But something like this is a very different beast to putting words on a page, it’s an art, and sadly, so much of the English storytelling tradition vanished long ago (please, if you’re not familiar with oral storytelling, it’s not someone reading stories aloud in a library. It’s thrilling, dangerous, and subtly different every time If you want some names of storytellers, ask me).

It’s a different beast, and Harris hasn’t simply adapted the book or rehashed it. In transforming Crows from book to this medium she’s looked at the whole piece through entirely fresh eyes. And, as musicians and performers, the band have more experience under their belts now, as well as a better understanding of the studio. The production is outstanding here, fulling enhancing and showcasing the music as well as letting it integrate fully with the telling. The songs themselves are more developed and there’s more…quiet confidence about the whole thing.

The words are stripped to the nub, by necessity, yet the story remains, beautiful and angry in turns. The songs offer the depth of characters and scene, slipping naturally from the story and yet strong enough to stand alone (“Dance Of The Days” really is a twirling dance of love).

Musically, it’s prog rock, but that’s what the band does. It’s their forte and this time out they’ve use it so well, with moments the swell into epic grandeur. Everything flows and evolves quite beautifully. The title track makes for a superb climax – with its catchy chorus it veers close to being a pop song – before the slow, slow fade that’s filled with lovely, autumnal change.

This isn’t an add-on to the book. It uses the same story as a base, but this is a feast for other senses, and a very satisfying one (as well as being a chronicle of the leaps and bounds development of the Storytime Band, who’ve become a staggeringly powerful outfit). The best advice? Read A Pocketful of Crows, and hear the CD. It’s like experiencing the tale in surround sound for the mind. 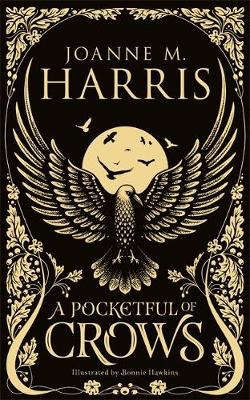 The Gospel of Loki

Loki. The trickster. The joker in the pack of Norse Gods. Always something up his sleeve, a word to get out of any situation. The archetype of the outsider. He has the fatal charm and the ready wit. And now he comes into his own with Joanne (M.) Harris’ new book.

First off, it’s a cracking tale that drives along at a very quick pace, the type of book where you’ve gone through fifty pages and are still hungry for more. In part, that’s the material, but it’s also down to Harris’ easy, conversational style as Loki. At its heart, this is classic storytelling technique, with the overarching envelope story reaching from Loki emerging from Chaos to Ragnarok and what happens after. But there are plenty of little tales in there, starting with the playful and gradually growing darker as the end begins to gather on the horizon, all of them building the character.

It wouldn’t be Loki without the humour, of course, and there’s plenty of that. After all, he’s a trickster, something that crops up in all mythologies, the wild card, or in his case, wild fire. He’s not one to settle easily, especially when the rest of the Gods never warm to him and keep him out of the charmed circle. Even his ‘brother’, Odin, never fully trusts him. But deceit and mistrust is part of the air in Asgard, home of the Gods.

Although billed as an adult fantasy, this is perhaps more of an interpretation of Nordic myth, building on it to lets Loki shine in all his aspects (pun intended). He’s not lovable but Harris marks his charms work so the reader’s on his side. And as the book goes on he becomes some more troubled by doubts, but still on a headlong drive for revenge – amazing how powerful that can be.

Set outside of time, there’s the freedom for the author to put in some sly contemporary one-liners (chillax and Choose Life come to mind) and a small asides about this and that, including those folk who need to mourn the famous they’ve never known in life. And all perfectly in character with Loki’s lightly eviscerating style.

Many of Harris’ protagonists have been outsiders. Vianne Roacher, the leads in blueeyedboy, Holy Fools, Coastliners, Blackberry Wine – none of them have been an easy part of society. So Loki is a natural extension of that. But where many of those she’s created before have redeeming qualities, they can be hard to find in Loki – unless you count regret. But even then, it’s part of the stew in his head.

Wonderfully paced, the sense of doom slowly encroaching until it becomes unstoppable as the manifestation of the Prophecy, events set in motion before the beginning – but also part of a long con – it’s a book of laughter and tears. You’ll embrace Loki even as you dislike him, and that’s a fine balancing act for a writer to achieve. ‘Gospel,’ of course, is a conceit, a world loaded with many connotations and quite deliberately chosen. But every word is true. Apart from the ones that aren’t, of course.

Read and enjoy, and try to manage what the Greeks hoped to achieve – balance order and chaos. It’s a joyous, terrifying, tumultuous ride. And there’s undoubtedly more to come.