Not just any pair of brothers; well, not to me. These are my great-great-great uncles

When my great-great-great-great grandfather moved to Leeds from Malton, had brought a family with him: a wife and four children. He was a butcher, and would have had to serve an apprenticeship in the trade. He quickly set up shop on Timble Bridge.

Isaac’s oldest son was also named Isaac, baptised in 1815. Four years later, another son named George, came into the world. Both were born in Malton and arrived in Leeds as boys As they grew, they apparently had little interest in following in their father’s footsteps. Instead, both became painters and decorators (as did another brother, John).

To enter the trade, they would probably have both had to serve an apprenticeship or indenture. Isaac Sr. would have needed to pay a fee for this, although it would have been less than for other trades.

Isaac married Elizabeth Watkinson, who was a year older than himself and the daughter of a wool stapler, at the Parish Church in Leeds in October 1834. He would have been 19. Their son, William Robert Nickson, was born in 1837. On the 1851 census, Isaac was listed as a painter and living at 50, Birch’s Yard.

George was also 19 when he married Mary Caroline Hewson, in 1839.   By 1851 they had four children, the oldest being a boy of nine, and lived at 31, Meanwood Road. George described himself as a painter and paper hanger.

Isaac and George went into business together in 1847. Before that they’d probably been journeymen, employed by others. Their business premises in the Lowerhead Row – in Birch’s Yard where Isaac was listed as living.

Home decoration and painting, and especially wallpaper, had become a thriving business as the 19th century progressed. Where it had once been an indulgence of the upper classes, it had moved beyond that. The middle classes wanted to make their mark on the houses they owned. Together, the brothers could take advantage of this (although their boast of ‘workmen sent all over the country’ was probably just as way to make themselves sound like a big firm). They were also listed as wallpaper marblers. This was a fad that had come back into vogue; knowing how to do it themselves would bring in more business.

George and Isaac seemed to do well enough for the best part of a decade. Then, in October 1856, Isaac announced in a newspaper ad that they’d dissolved the partnership “by mutual consent” and that he had new premises on Wade Street (although he’d also be in the place on Lowerhead Row until 1859). By now he was a sign-writer, furniture painter, whitewasher, and handled ornamental colouring, as well as “painting and paper hanging in all its branches.”

It seems straightforward enough. However, in a single, short line, a publication called Perry’s Bankrupt Gazette offered the real reason: The partnership had been dissolved on October 8 because of debts by George Nickson.

It wasn’t until 1859 that Isaac finally moved from the Birch Yard address to trade solely in Wade Street. He did also briefly have a place at 21, Roundhay Road in Sheepscar, but that doesn’t seem to have lasted long.

George kept on the Birch Yard premises as well as using his home address in Meanwood. Both appear on an invoice from 1858.

He was buried at Beckett Street Cemetery, his address showing as 42 North Street – barely a stone’s throw from where he used to live on Meanwood Road. His gravestone shows several of his children buried in the same plot.

He must have done moderately well for himself, although he only left under £450 to his wife.

But she proved to be a very adept businesswoman.

She continued the business after he died, and in the 1871 census proudly declared that as a painter and decorator she employed seven men and a boy.

In 1870, their daughter Jane married a man named Ward, the event warranting a notice in the papers.

The death of his song George in Hunslet in 1888 also received a notice.

Isaac, however, had moved up in the world. Painting and decorating were lucrative for him. He’d become a voter, which means that his property on Wade Street, which was both home and workplace, as was often the case, had a good freehold value, and he apparently owned another property of Back Blundell Place

In 1866, he was one of a number of speakers at an event in the Working Men’s Hall, a sure sign that he’d become somebody. He was also listed as one of those campaigning for Edward Baines in the election.

He didn’t have too many years to enjoy his success. In May, 1871, though, Isaac died, aged 55. He was buried at Woodhouse Cemetery.

Interestingly, it wasn’t just George’s wife who continued the family business. Elizabeth, Isaac’s widow, was listed in the 1872 directory as a painter and paper hanger, still at the Wade Street address.

In 1876, however, she remarried, aged 63. On June 27, no longer calling herself a businesswoman, she married Thomas Drewery, a man 10 years her senior. He lived on Hanover Street, just off Hanover Square, a fashionable Leeds address, and styled himself as a gentleman.

Elizabeth die in 1899 and left £2200, a very respectable sum. However, the two people who shared the money hadn’t shown up before in her family. Who they were remains a mystery. Her second husband had died in 1892 and left over £2000 to his son.

Isaac and Elizabeth’s son, William Robert, also made a good living as a painter. He also held enough property to become a voter, with a house at 11 Wade Street, very close to his father. He died in 1890, by which time he and his family were living on Ramsden Terrace, and was buried at Beckett Street Cemetery.

Two brothers, two families that went very different ways. I have to admit, I’d love to know what debts of George’s broke up the partnership, or was there more simmering underneath? Far too late to know now, of course. But what we can learn does offer its own tale.

Fortunes could change quickly in Victorian England. In a single generation some men could leap beyond tradition. And some women could find power and independence.

It’s hardly a secret that most of my books are set in Leeds. But my family, on both sides, goes back generations here. Leeds and family are pretty much the same thing to me. But how did those ancestors of mine live?

Its turns out to be a question with a few surprising answers.

My great-great-great-great grandfather Isaac Nickson was born in 1785 and arrived in Leeds from Malton somewhere around 1826/7, with his wife Jane and six children (two more would be born here). In 1823 he’d been listed in the Malton trade directory as a butcher, with premises on Newbiggin, a trade he carried on in Leeds. How much he made of himself is debatable, at least from his shifting addresses: East Bar, a shop and house on Timble Bridge, 43, Marsh Lane, Garland’s Fold. By 1840, Jane had left him, moving to Rothwell with two of his daughters.

But things grow more interesting with the next generation.

Of his five sons, four became painters and paper hangers. It was a theme that would continue for some of the men into the 20th century. Others had similarly unskilled occupations – heeler and boot repair, tailor’s cutter. Poor men, in other words. My father and his brother were the first to have secondary education, in the 1920s, purely because they won scholarships.

Isaac’s oldest son, also named Isaac (b.1815), and younger brother George (b.1820), were in business together, with premises in Birch’s Yard, 4, Lowerhead Row, advertising themselves as House and Sign Painters, Paper Hangers, Marble Painter Manufacturers.

George, who married Mary Caroline Hewson (known as Caroline) in 1839, was at Crimble Row, close to Camp Road.

Another brother, William Isaac (b.1824), was also a painter, as was youngest sibling, John (b.1827), who lived first on Lower Brunswick Street, then Vandyke Street, off Regent Street, and had his premises at Ship Inn Yard, off Briggate

George and Isaac seemed to go their separate ways before George’s death in 1867. Caroline took over George’s business, very rare for a woman in those days, and in the 1871 census she’s shown as employing seven men and two boys – obviously a successful woman. She was living at 200, North Street, and had one servant, 15-year-old Elizabeth Strafford. George was buried at Beckett Street Cemetery, plot 5932. In 1877, Caroline married George Heuthwaite, a widower of Hunslet Road who made his living as a dyer, and she died in Hunslet 20 years later. 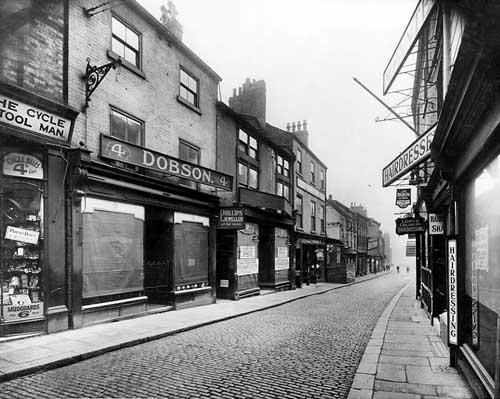 Entrance to Birch’s Yard on left, past Dobson’s 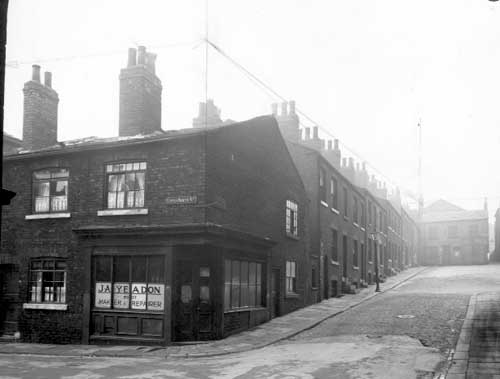 Caroline’s son, Robert Hewson Nickson, probably took over the business and made it pay well, with premises in Lonsdale Yard on the Lowerhead Row (later known as Bradley’s Yard).

On his death in 1893 he left £331 19s 5d over £40,000 in today’s money, a staggering figure for a working-class man. Yet they still lived in an ordinary terraced house on Stamford Street, although they had a servant, Edith K. Simmons, aged 12.

In 1901, Robert’s widow, Clara, is listed as a painter and decorator, so she took over the business, although two years later she’d sold it and had a boot making business on Roundhay Road.

Isaac obviously as well as his brother, because in 1868, still living on Wade Lane, he was on the electoral roll, owning property worth more than £50, a large amount. In these days of a universal franchise, it’s difficult to believe how restricted the vote was in the 19th century.

Isaac Jr.’s son William Robert was yet another painter. Born in 1837, he learned the trade properly, and the 1861 census lists him as a journeyman painter, so he’d obviously completed his apprenticeship. At that point he was living on Wade Street with his father (although in the census he’s shown as a servant, strangely, and his uncle William is also shown there, again as a servant, although he has his own census listing with his family on Elm Street). But by 1868, he, too, was on the electoral roll.

William Robert had his business premises in Wheatsheaf Yard, off Briggate.

Grave of William Robert and three of his children, Beckett Street Cemetery

He died in 1890, but the 1891 census shows his widow Anna (or Hannah) Elizabeth living on the very respectable Ramsden Terrace and running the painting and decorating business – not bad for someone, it was noted, who could not write.

Ramsden Terrace at top of picture

Her son (yet another Isaac) lived with her, following in his father’s footsteps as a painter and decorator.

These are just a few instances, of course. But they show that in Victorian Leeds, it was possible for working men to make the leap across the class barrier to wealth and property. Yet what strikes me as remarkable is the fact that not once, but three times, women took over the businesses, and very male businesses at that. They didn’t give up, didn’t immediately sell them off. And they did it all successfully. In a time when that wasn’t a woman’s role, they showed that women could do it, and do it well. It was possible, for some, to transcend their origins and traditional roles.

Of course, not all the brothers did so well. William Isaac, my great-great-great grandfather, married Charlotte Berry in 1844. They had two children, John William and Martha, and lived on Elm Street, just off York Road in the Bank.

So, to those who have occasionally expressed surprise that Annabelle Harper in my Victorian series of books would be able to run a business so well, all I can say is that the precedent is right there. No wonder I see it as natural; it’s in the family.

All street images from Leodis.