It’s just under three weeks until Modern Crimes is published. You haven’t really had chance to get to know its heroine, Lottie Armstrong. What better way than in a new short story that gives you the opportunity to know a little more about WPC Lottie Armstrong, and how she wants to be a proper copper.

You can order the book. The paperback comes out on the 7 September, January 2017 in the US. But the ebook edition is published everywhere September 7, and it’s dead cheap (thank my publisher). Details after the story.

‘Come on.’ Lottie stopped and turned, hands on her hips. ‘It’ll take us an hour to get there at this rate.’

Cathy Taylor bent over and retied her laces. ‘You’re not the one breaking in new shoes. They’re killing my bunions’

‘Half a dozen men are craning their neck to look at you like that,’ Lottie hissed.

‘Let them.’ Cathy straightened and grinned. ‘I’m don’t mind being the centre of attention.’ She wiggled her toes. ‘That’s a little better. We’ll be there in two shakes of a lamb’s tail.’ Cathy began to stride out across Woodhouse Moor and looked over her shoulder. ‘Well? Are you coming?’

1924, and they were the first two women police constables in Leeds, their first year on the beat. WPCs looked after the women and children; those were the orders. Shoplifters, truants, moving on the prostitutes. Not proper coppers, one officer had told them with a sneer.

Lottie Armstrong didn’t care. She’d heard worse when she’d worked out at Barnbow during the war. A fews insults ran off her like water from a duck’s bath. She was twenty-five, loved the work, and she had a husband who liked her to be happy. Cathy? Well, her husband spent most of his time away with the merchant marine. Work filled her days, brought in some money, and gave her the chance to flirt with anything in trousers. And she was right; she always liked being the centre of male attention. She didn’t even have to work with it. Skinny as a rail, one of those fashionable figures, and with her hair in a bob, men regularly gave her a second glance. Lottie was…rounder. Not that she really cared. Most of the time.

They knew exactly where they were going. It was May and already their third trip to the same address that year. Once in April, twice this month. Elsie Chalmers. Bold as brass, she nicked things from shops. Classy shops and good department stores. Matthias Robinson, Marks and Spencer, Schofield’s, the Pygmalion, Marshall and Snelgrove – none of them were safe from her. Knickers, gloves, a blouse or two. Everyone knew she did it; they’d simply never managed to catch her with the goods. It had been going on for five years, always in the spring and summer, as if she took winter off.

‘It’s like cricket,’ the desk sergeant said. ‘April rolls around and it’s the start of Elsie’s shoplifting season.’ But no matter how often they searched her house, they’d never found the items she’d taken.

This time, though, she’d outdone herself. Elsie stolen an expensive coat, on sale after the winter season. Heavy wool, with a fox collar. It wasn’t something she could slip into her handbag as she passed. She’d tried it on, admired the fit in the mirror and waltzed out still wearing it. By the time the shop assistant realised, Elsie had vanished into the crowds on Briggate.

That had been two hours before.

Now they had their orders. Go and search Elsie Chalmers’ house. Again. The way she kept coming back here, Lottie thought, she might as well rent a room from the woman. She already knew the layout as well as she knew her own home on Oak Road.

It was a decent three-storey terrace with a front garden no bigger than a postage stamp. A tiny spot of lawn that could be clipped with a pair of nail scissors and a rose bush that climbed awkwardly towards the neighbour’s hedge.

Cathy knocked on the door. They waited a moment then heard footsteps clicking down the hall. Then, finally, Elsie herself.

‘Hello.’ She managed to sound surprised. ‘What brings you two here? Why don’t you come in?’ She stepped aside to let them through.

‘At what, dear? What do you mean?’ She was fifty if she was a day, but she tried her best to hide it, always beautifully turned out. A strong girdle to keep her figure under control, neat, stylish clothes, a hair style that hadn’t come from the shop on the parade down the road. And plenty of make-up to hide the wrinkles. ‘Would you like some tea?’

Every visit here meant tea and cake. It was a ritual, part of the game for the woman. Lottie looked at her, wondering what was going on in her head. Why did she do this? What did she gain from it?

‘The one you stole this afternoon.’

Elsie gave a sweet smile. ‘But I haven’t stolen anything.’ She waved a hand. ‘Take a look around.’

She still wore the wedding ring, although her husband had been dead since the Somme. He’d left her a little, enough to get by. Lottie knew that much from talking to her. She could afford the clothes she took. Maybe stealing brought a little thrill into her life.

Never mind, she thought. Maybe this time they’d catch her.

Cathy was in the bedroom, moving clothes along the rail.

‘She’s got enough dresses to fit an army. I bet she never paid for half of them, either.’ She held one out. ‘Feel that. Real silk. She couldn’t afford that.’

Lottie knelt and checked under the bed, then in the box room, the empty spare bedroom, and finally the attic. She pushed the cobwebs away with her hand, looking for feet marks on the dirty floor. Not a thing.

They marched back downstairs, feeling the frustration. Wherever it was, Elsie had a good hiding place. The best. But this time, Lottie decided, this time she’d find it, even if she had to tear the place apart brick by brick.

The parlour, the kitchen: no coat. That left the cellar. Lottie raised an eyebrow. Cathy sighed. They’d been down there before. Last time they’d found a huge spider over the sink and a rat had scuttled across the floor before vanishing into a hole. But they had to do it. Lottie gritted her teeth.

Five minutes of searching everywhere. They moved old furniture that had been left here, coughing as dust rose into their faces. By the time they climbed back up to the kitchen, their uniforms were filthy. They patted themselves and each other. Best to be immaculate before they reported back in to Millgarth police station or Mrs. Maitland, the matron, would be tearing strips of them both.

Lottie stared out of the windows at the yard.

‘Just wait a minute,’ she said.

It was no more than six steps across the yard to the coal shed up against the back wall. There’d be an opening on the other side, so the coalman could deliver from the ginnel.

Lottie opened the door. She expected a small dark cloud to rise as she stepped inside. Instead the small space was swept spotlessly clean.

A long bag hung from a nail on the wall. A few carefully sealed boxes were stacked on the floor. Lottie began to smile.

‘Elsie,’ she called once she was in the kitchen again, her arms full, ‘Could you come here a moment?’

‘What is it?’ She heard the small sigh of the chair as the woman rose. As soon as she entered the room, her face fell. ‘Oh dear,’ she said. ‘Oh dear.’

‘How did you know?’ Cathy asked. They stood in the ladies’ at Millgarth Police station, washing off the day’s grime after their shift. Elsie Chalmers was down in the cells, waiting for her solicitor. ‘None of the blokes who’d searched the place before ever thought of it. We didn’t, either. What made you look there?’

‘I’m not sure.’ She studied her reflection. It was true. She’d had a sudden flash, that was all. Seeing the coal shed, remembering that there hadn’t been a fire in the grate, that day or the month before, that the woman only shoplifted when the weather grew warmer. In a moment, everything seemed to fit together. ‘It doesn’t matter. We got her.’ She smiled. ‘Just like proper coppers.’ 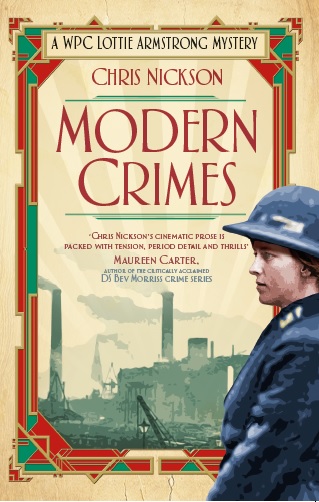