For one week, I’m taking a break from going on about The Tin God. But I do have some news that’s related…

I’m over the moon to tell you that just yesterday I heard that my publisher loves the next book in the Tom Harper series. It’s called The Leaden Heart, and it’s very different – at least, I hope it is. It’ll be published next March in the UK.

Before that, though, there will be other things. One of them is The Dead On Leave, which will be out next month. It’s set in Leeds – of course – in the autumn of 1936 during the brief rise of British fascism under Oswald Mosley.

A week before the Battle of Cable Street in London, Mosley brought his Blackshirts to Leeds. They wanted permission to march through the Leylands, the Jewish area of the city. It was refused. Instead, they had to settle for a march out from the city centre to a rally on Holbeck Moor.

There were about a thousand of them. They were met by a crowd of about 30,000 – a beautiful mix of Communists, Jews, and people who objected to the threat fascism offered.

No guesses as to who came out victorious. But for Detective Sergeant Urban Raven (in case you’re curious about the name, I had a great uncle called Urban Bowling, and this is a faint nod to him, although he died before I was born) the duty there was just the start of things… 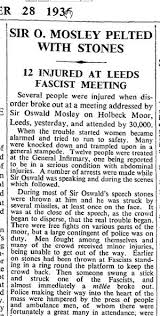 He was one of fifty plain clothes officers in the crowd, there to try and break up any trouble before it could become serious. They didn’t have a chance, not out here, and all of them knew it. It was like being on the terraces for a match at Elland Road. Thousands upon thousands, so close together that it was hard to move. Even more than the communists had predicted, he was certain of that. And there’d been hundreds lining the route as he walked here from town, all of them ready, all of them with anger on their faces. Mosley and his fascists were going to have a rough ride. He pitied the bobbies who had to march alongside them. He turned to Noble.

‘Well, Danny, made your will yet?’ He could see the worry in the young man’s eyes. That was good; a little fear kept you alert and alive. All around, people were stirring, shouting, singing. They had stones at their feet, an arsenal of weapons. The crowd was primed. And the Blackshirts weren’t even in sight yet.

They came soon enough, though. He could hear them long before they were in view. The clatter of marching boots on the cobbles. Even louder, the catcalls and yelling from the crowd. He glanced at Noble. The lad swallowed hard, his face pale.

He looked around, feeling the people stir. Somewhere out there the police had three sharpshooters. He just prayed they wouldn’t be needed.

Give Mosley some credit, he thought. The man didn’t cower behind his supporters. He strode, unafraid, at the head of the parade, back straight, looking like the aristocrat he was. Sir Oswald Mosley. A carefully tailored black uniform to match his looks, just like a film star with that little moustache.

The others were right behind him. At the front, the bugle and drum corps, their music drowned out by voices. After them, the shock troops, the I Squad, all of them smirking like thugs who’d done their share of prison time. Then the believers, most of them terrified. A spectacle of ugliness.

Time, Raven thought. It was time.

It started almost as soon as Mosley began to speak. He’d just announced that ‘the war on want is the war we want’ when the first stone arced through the air.

A moment’s silence as people followed it with their eyes. It landed short of the stage, catching a Blackshirt on the head. That was the signal. Suddenly the air was full of branches, cobbles prised up from the roads. Bricks. Potatoes with razor blades protruding from the skins.

Raven knew his duty. He was here to arrest those who were disturbing the peace. Sod that; he wasn’t even about to try. This lot would tear him apart if he produced his handcuffs.

Bloodlust, that was what it was. Frenzy. Missiles flew both ways. Mosley kept speaking until a stone caught him in the face and he crumpled, his guards quickly gathering around to protect him.

One of the Blackshirt musicians waded into the crowd, swinging his bugle like a weapon and cracking some heads. Too far away to reach, though. Everyone had surged forward, packed so tight that breathing was hard and movement impossible.

Noble was a good six feet away now, shoved around like flotsam by all the bodies surrounding him and looking scared. Never mind, Raven thought, he was trained, he could look after himself. The best thing they could do was try to identify the worst troublemakers. Later, once things had calmed and everyone had gone home, they could go and arrest them.

He glanced up again and the fascists were forming ranks to march away. They hadn’t lasted long. Mosley was still there, blood flowing from the cut on his face. The men and women with him looked more ragged now. Stunned, bruised, battered as they left. And the worst was yet to come.

People would be waiting on the route with stones and more. More would be up on the roofs. It was going to be brutal. Here on the moor though, he couldn’t do a damned thing about that, and he was glad to be away from it all.

Men were helping the wounded as the crowd began to disperse. Bloody handkerchiefs held to heads, a few carted off unconscious. Weapons lay strewn across the grass. It was like the aftermath of a battle. An air of silence and desolation hung over the Holbeck Moor. All those walking proudly away or just limping – women along with the men – had that curious glint of battle in their eyes. A few sat on the grass, smoking cigarettes and looking as if they weren’t sure what had happened.

His part was done. He knelt, picking twigs and small pieces of glass from the turn-ups of his trousers. Noble was talking to a man who stood cradling his wrist, nodding blankly as he spoke. Raven started to walk towards them. Then he heard the sound and stopped.

In the distance, the piercing shriek of a police whistle.

Noble was younger and fitter, he had longer legs. He sprinted, following the sound. All Raven could do was trail behind, panting. On the road, the protestors had already faded away like smoke. He could hear angry shouts in the distance, but they might almost be in another county. He breathed hard, keeping Noble in sight as he pounded along before turning onto a street with a Bile Beans advertisement fading on the end of the gable. No motor cars around here, he thought. Tram or shank’s mare, that was the choice. A bicycle for the fortunate ones.

People had gathered around a squat brick building. The privies. All the houses here would share outdoor toilets. Breathless, he shouldered his way through the crowd, watching the anger and insults vanish as soon as they saw his face.

A harried constable was trying to keep everyone back. There was dust on his uniform and a small cut on his cheek above a thin moustache. The tall helmet had a dent in the high crown. Caught up in the march, Raven thought.

‘At the back, sir.’ He straightened to attention and started to raise his arm for a salute. The sergeant waved it away and marched past, Noble right on his heels.

The body lay in the tight, stinking space between the back of the privy and a brick wall. It must have been dragged there. A man, just beginning to run to fat, he could see that much. One arm was raised, covering his face.

He could pick out the Burton’s label in the suit. Decent leather soles on his shoes, not worn through to holes. Not rich then, but not poor either; someone in work. And murdered. Absolutely no doubt about that.

‘Get that uniformed copper,’ Raven ordered. ‘If this is his beat, he might know who this is.’ Noble seemed rooted to the spot, staring at the corpse. Of course, his first murder. Death might be common, but killing was rare. There’d been three in Raven’s fifteen years on the force. Four now, he corrected himself. He gave Noble a nudge. ‘Copper,’ he said. ‘After that, find a police box and call it in. Tell them we need the crew out here.’

Alone, he squatted, trying for a better look at the body. They couldn’t move him until the evidence boys had been out to take their photographs and measurements and he couldn’t reach the pockets to find a wallet. Damn.

Raven breathed through his mouth, small gulps of air, trying to ignore the stench. There had been places like this every day when he walked the beat, but he’d forgotten how bad they stank.

‘You wanted me, sir?’ the bobby asked.

‘No, Sarge. I’m PC 7862, Jones, over in Beeston. They just had me here for the Blackshirts.’ A tiny glimmer of envy in his voice as he said the name.

‘Have you ever seen this man before?’

The constable squinted and swallowed, Adam’s apple bobbing hard before he shook his head.

‘I don’t think so, sir. Can’t see his face properly but he doesn’t look familiar.’

‘Good. You stay here and keep them all at bay.’ Raven glanced at the wall. ‘Better watch that, too, or there’ll be boys over it before you can say Jack Robinson.’