The Internet is full of rabbit holes. For me, bits of Leeds history can start me burrowing, and I only emerge, blinking, a few hours later. The Leodis site, with its wonderful old photos of Leeds, is like a little warren, an Aladdin’s cave, a place to lose myself for hours.

And inside there’s plenty of treasure. Like these, the oldest photographs of Leeds. We’re so used to seeing images that it’s easy to forget that the science of photography isn’t even 200 years old yet. The very first picture taken with a camera dates from 1826 or 27. The first to include a person? 1838.

It was quite a while later that the camera came to Leeds, at least from images that remain. This would seem to be the oldest, dating from 1866. Leeds Bridge as it was then, before it was replaced by the new iron bridge in 1870. This structure dated from the 1730s, and that had replaced an older one. It’s still an immediately recognisable view.

A year later came this view of Lower Briggate, with the rise of Holy Trinity Chruch in the background. All these buildings on the street are long gone now, as are the two women talking, or the mother and son walking along the pavement (the picture looks as if it might have been taken from a room in the Royal Hotel, which started life as a coaching inn in the 1690s). 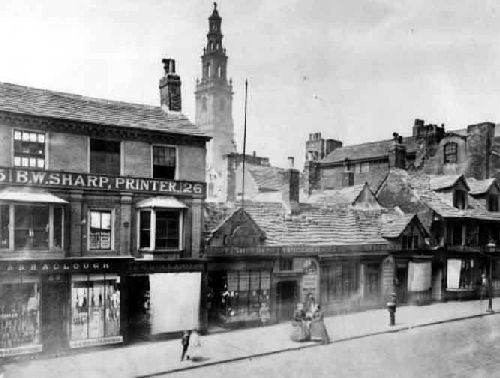 From the same period is this one of Briggate, with the old Corn Exchange in the middle of the road, as the Moot Hall had been before it. By then, the Corn Exchange we all know had been opened, and this building was awaiting demolition. What’s remarkable is how empty Leeds’ busiest street was. It’s eerie. Just what time of day were these shots taken?

Bridge End, just by Leeds Bridge, is where this photograph was taken in 1869. There’s life here: people walking and starting to move into the frame, the blur of mother and child behind the window. There’s a barber’s pole by the shop, the neat display of goods in the window, and the archway for carts and deliveries. It’s worth noting the discolouration of the brickwork, covered by a few generation of soot from the factories and mills.

1870, Rotation Yard, taken from the entrance. The photographer must have climbed a ladder to take the picture and frame it this way. More people, mostly men, but also a shopkeeper’s wife standing next to her husband. There’s a mix of working men, on the right of the picture in their caps and battered bowlers, a pair of youths, and a few more who look eminently respectable. The small street is clean, well-cobbled, a reminder that not every court in Leeds was home to the poor. For those who know Leeds, this is now part of New Market Street.

It’s impossible to know it now, but this is Lands Lane in 1881, with a very different selection of shops compared to today’s ‘retail offering.’ It would have been part of Tom Harper’s beat in those days; at that time he would still have been a constable. 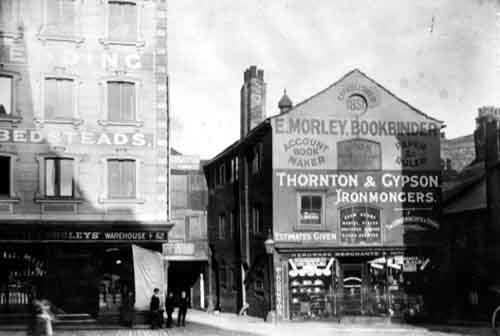 Across the river to Hunslet, and a reminder that Leeds did once have a formidable pottery company in Hartley, Green & Co., whose premises were on Jack Lane. Taken in 1883, this is two years after the pottery closed for business. The office is the squat building to the left, and the conical structures are all kilns.

Political meetings drew huge crowds throughout the 19th century, and well into the 20th. This gives an idea of the vast scale. Taken in the courtyard of the Mixed Cloth Hall (which stood where the NW corner of City Square is today) in 1880, it shows the yard filled to its capacity of 20,000, all gathered to listen to William Gladstone, who’s on the platform in the distance. 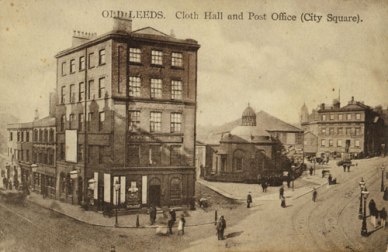 Roundhay Road in 1889, with workmen laying track for the tram. This view looks north – the first street going off to the left in Gathorne Street. The very first electric tram in Leeds, travelling from Sheepscar to Roundhay Park, appeared in October 1891. At the end of the third Tom Harper book, Skin Like Silver, Annabelle Harper wangles an invitation for herself and Tom on the inaugural trip.

Those are the old photos. To go back further, we need sketches. This 1834 panorama of Leeds, probably sketched just downriver from Fearn’s Island, show the effect of industry. Factory chimneys rise like awful fingers, leaving a pall of smoke; you can almost taste the soot. The Parish Church stands tall, four years before it was completely rebuilt. It’s a Leeds that’s beginning to look familiar to us today.

The oldest illustration I’ve found, though, is far uglier in its own way. It dates from 1694, an image from Mabgate, found in the Leeds Corporation Court Books, showing a woman being dragged to the ducking stool by Lady Beck (or Sheepscar Beck). We even know her name: Anne Saule, the wife of Philip Saule. According to the record, several complaints had been that, stating she was “a person of lewd behaviour, a common scold and daily maketh strife and discord amongst her neighbours, it is therefore ordered that the said Anne Saule be ducked.” In fact, she was one of three women receiving the same punishment that day. The others were Jane Milner and Elizabeth Wooler, both of Mill Hill. At least we’ve moved on from that. But it’s the only old image of Mabgate that I’ve ever seen.

5 thoughts on “The Oldest Photos Of Leeds”