Last month The Dead On Leave, my novel set in Leeds in 1936, was published. It’s out there, £7.99 in paperback, cheaper on ebook, and yes, I do think you should read it. It is – I hope – an honest picture of a city gripped by the Depression and trying to find its way in a country that’s changed and threatens to leave it behind.

It’s also about the rise of fascism, which didn’t make much headway in the country, thanks to the efforts of many good people, and a population that rejected it. Between those two things, it’s something of a mirror to the present – although the book doesn’t try to offer any lessons.

But it’s still a good read, if I say so myself. So tempt yourselves with a bit more of it…

‘You know people in the Communists, don’t you, Raven?’ Kennedy asked quietly as he put another match to his pipe.

‘Have a word with him, will you? See what he can tell you.’

He knew where he’d find Johnny Harris. Six o’clock on the dot and he’d walk under the Magnet Ales sign into the Pointer in Sheepscar. Harris worked at the boot factory near the bottom of Meanwood Road, operating the machine that attached the upper to the sole. He’d done it for so many years that his skin on his palms was as tough and callused as the boots he made and he’d never be able to scrub away the smell of leather.

Harris had fought in the war, Gallipoli first, then the trenches, from the Somme all the way to Armistice Day. He’d seen the very worst and come back to a promise of a home fit for heroes, words that were nothing more than lies. As soon as they evaporated into thin air he’d joined the Communists and stayed loyal all through the purges in Russia, never wavering in his belief, working his way up to local party secretary.

Raven had grown up with Harris’s younger brother, Paul, the pair of them at school together. The families lived a street apart; he’d known them all his life. But it was only in the last few years he’d had much to do with Johnny.

Harris was a tough man, loud, always ready to argue his point. He read a great deal, his back-to-back house on Manor Road crammed with books. All communist, all biased, but Harris believed with the true fervour and devotion of a convert.

He’d been one of the organisers of the demonstration against the Blackshirts on Holbeck Moor. Harris probably counted the violence as a victory. But Raven hadn’t come to argue the finer points of politics as he parked the Riley by the library at the bottom of Roundhay Road. He needed information.

Harris was leaning on the bar, his broad back to the room, savouring his first pint after work. Another half hour and he’d go home to his wife and two daughters and be a loving husband and father when he wasn’t doing party work. But this was his time.

‘Give him another,’ Raven told the barman. ‘I’ll have a lemonade.’

With a wary look at the policeman’s scarred face, the man nodded.

‘You must be on duty.’ Harris didn’t even raise his head. ‘You’d be on the pints otherwise.’

‘I’ll drink to that.’ Harris pushed himself upright. He had large hands and heavily muscled arms. At first glance he looked to be a big, dangerous man. But there was a twinkle at the back of his eye and usually a smile playing around his mouth. He sipped the head from the drink with a wink. ‘I’ll accept the beer because it’s depriving the capitalist state of money it might use to exploit the people.’

‘A success.’ Harris interrupted. ‘We sent them packing.’

Harris grinned. ‘You didn’t go on your own time, I bet.’

‘Don’t be daft. I wouldn’t waste a Sunday. But someone else was there of his own volition.’

‘That body in the paper today?’ Harris asked.

‘Not at all. A fan of Mosley. He was a means test inspector.’

‘What are you suggesting, Urban?’ Harris asked quietly. ‘That we were responsible?’

‘No,’ Raven answered slowly. ‘I’m asking, that’s all. Have you heard anything?’

‘Not a dicky bird.’ He took a long sip, draining half the beer. ‘How was he killed?’

‘Strangled with an electrical cord.’ Raven saw the man flinch and his fingers tighten around the glass.

‘None of my lot would do that.’

‘You don’t know for sure, Johnny. We have to find the killer and we’re going to need help.’

Harris pursed his lips. It would be hard for him to help the authorities. It went against everything he believed. But if the killer turned out to be a party supporter and he did nothing to help…

‘Someone murdered him. And it’s a cold-blooded way to die. Brutal.’ Raven finished the lemonade. ‘I’d appreciate the assistance, Johnny, but I’ll leave it to your conscience.’

‘You’re a bastard, Urban, putting me on the spot.’ He shrugged. ‘Let me ask a few questions, all right? But I’m certain it wasn’t any of my people.’

No car for the journey home today; the police would never be that generous. Probably for the best, anyway. He’d only end up with a curious crowd outside the house, staring at the only car on the estate. Jim Green, all the way down on Coldcotes Drive, had a motorbike, but he’d bought it as a wreck and rebuilt it himself.

Raven had to wait for one of the Lance-Corporal trams, half-dozing as it clanked along York Road.

No lights on at home, but there was the smell of cooking in the kitchen. A note on the living room table read: Gone to the pictures with Gladys. Your tea’s in the oven. At least there was food, he thought. And some peace and quiet.

He ate, then left the plate in the sink. Kettle on the hob to make a cup of tea, staring out over the garden as he drank. There was too much to think about on this case. All they had was a jumble of pieces. He couldn’t even see all of them yet.

Maybe Johnny would come up with something. If there was even anything to find. Perhaps a bobby going through the list of Benson’s claimants would find a man so torn by guilt that he confessed. Right, he thought as he looked into the growing darkness, and they’d see pigs flying over the Town Hall in the morning. This was going to be slow and difficult and it was going to be painful. 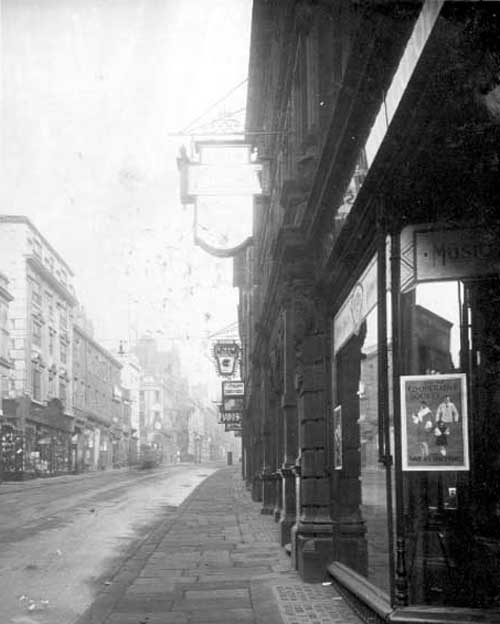