We think our cities are crazily busy these days. Compared to the late Victorian times when The Leaden Heart is set, though, they’re almost pastoral. Back then, they were crammed with pedestrians and carts and trams. People spilled off the pavements as they walked. They had no choice; taking your life in your hands was the only way to get anywhere.

Take a look at this footage from Briggate in 1898. Come on, take a ride on the top deck of a tram and look down. It’s utterly anarchic. People wander across the road without the slightest concern for traffic. Carts pull over at the last moment. Note the line of cabs waiting for fares in the middle of the road. And somewhere off to the right, they were starting to tear down all the courts and streets to build what would become Country Arcade and the Empire Theatre. The change had begun with the construction of Thornton’s Arcade more than 20 years before, followed by others – the Grand Arcade and Queen’s Arcade. Leeds was hollowing out those courts and yards that had been home to generations of people and making the switch to a retail economy. People didn’t live in the city centre any more, and wouldn’t for decades.

This is Tom Harper watching the construction:

“With a slither and a grunt, an old steam tram passed, filled with people. Harper strolled up Briggate, hands in the pockets of his trousers. He studied people, faces. It was habit, ingrained during the days he walked a beat around here. It was still good to get out, to meander and watch. It kept him in touch with his city.

On the other side of the street, the arcades had torn the guts out of the old courts and yards behind the buildings. Still plenty left, but year on year they were disappearing.

He stopped and peered between some boards, already plastered with advertisements. White Hart Yard had gone, knocked down by the hammers. Soon enough there’d be something new in its place. County Arcade, with more shops, and a way through from Vicar Lane. There was plenty of money in Leeds and people wanted places to spend it. The city was growing prosperous, changing so quickly he could barely keep pace.

But Harper kept wondering what had happened to those people in Fidelity Court and the other tiny streets that didn’t exist any longer. Where had they all gone?

Leeds was filled with noise. Voices shouting, carts on the cobbles, machines thudding and pumping. Relentless, battering the senses every day.”

And here’s what it looked like, before and after.

There’s no doubt that Country Arcade was a jewel – and it’s the essence of Leeds rich these days, there at the heart of the Victorian Quarter. But it no longer has a restaurant that looks as remarkable as the Ceylon Cafe did.

It wasn’t just Briggate that was jam-packed. There was a constant flow of business traffic over Leeds Bridge. And, of course, always some boys – who should probably have been at school – curious about everything passing in the river beneath. This footage must have been shot from the same building as Louis Le Prince’s pioneering footage just a few years earlier.

And here’s more of the bridge, followed by a trip along Boar Lane from what would become City Square. Again, it’s madness.

It takes your breath away, doesn’t it? All those people, the faces exactly like ones we see every day. The traffic, and you can only imagine all the noise and the smell of the horse dung and the smoke from the factories. We’ve been instilled with the idea that the Victorian and Edwardian eras were filled with decorum. Don’t believe a word. These moving pictures of Leeds tell a different and much truer story.

This is the place that Tom Harper and his men have to deal with every day in The Leaden Heart. And if you look at some of that footage, you might spot Annabelle Harper in a skirt, blouse and boater crossing the street. Pay attention, though. Blink and you’ll miss it. 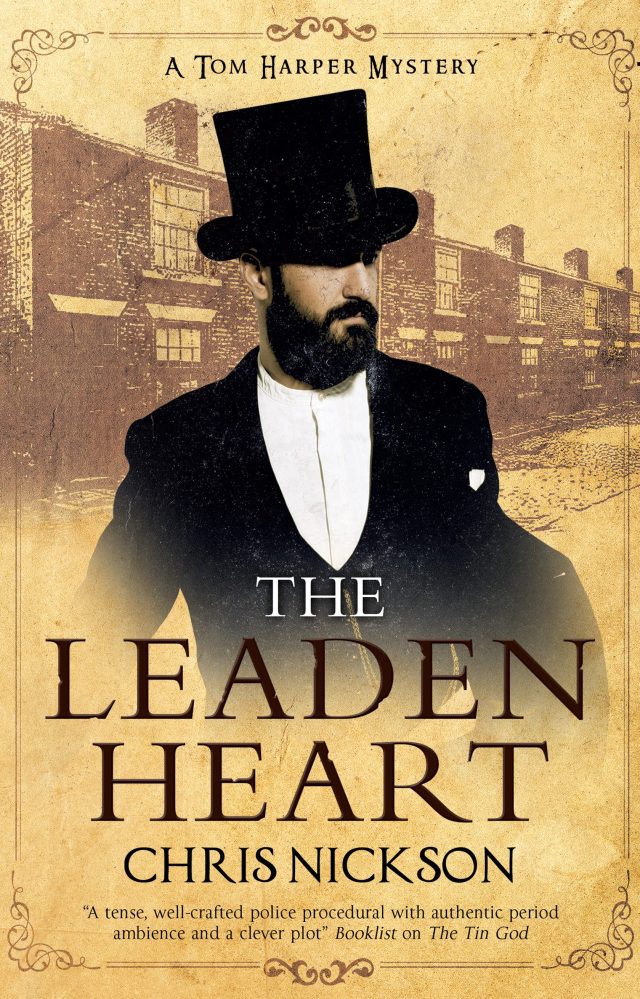 The Leaden Heart is published in the UK on March 29, and everywhere in ebook on May 1. One reader has called it “the best book I have read so far this year.” I’ll happily take that.