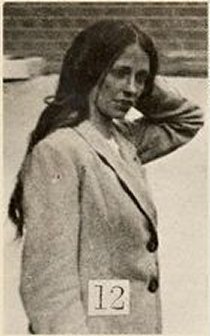 As you’ll almost certainly be aware by now, my new book called Brass Lives is published next week.

While one of the main characters is based on the real-life Leeds-born gangster Owen Madden, one small strand features another real person – suffragette Lilian Lenton. She was in Armley Gaol on Leeds, accused of arson in Doncaster. On hunger strike, she was released under the Cat and Mouse Act. The idea was she’d eat and gain weight, then be hauled back to prison.

However.., in the book, Special Branch is watching her. Let’s say it’s not a success. What I’ve described seemed to be what really happened.

Friday morning, half-past eleven. Harper sat in the chief constable’s office, listening to Inspector Cartwright of Special Branch. Beside him, Sergeant Gough’s face was so red with anger that he looked as if he might explode.

‘None of my men had seen any sign of Miss Lenton, so I knocked on the door first thing this morning and asked to see her. I wanted to know if she was well enough to be returned to Armley Gaol.’ Cartwright spoke as if he was reciting from his notebook in court.

‘Go on,’ Parker said. He clamped down on the cigar in his mouth to hide his amusement.

‘The maid told me that she wasn’t there. My men searched the house from top to bottom and the information was correct. She was not there.’

Parker studied the rising smoke. ‘Have you discovered what happened?’

‘She escaped, that’s what happened.’ Gough was close to shouting.

Harper raised an eyebrow. ‘How?’

‘As best as we can ascertain, sir, she was in disguise,’ Cartwright continued, avoiding their eyes as he stared at the wall. ‘She arrived on the Tuesday. Late that afternoon a delivery van appeared on Westfield Terrace. It was driven by a young man. He had a boy with him. We observed the boy eating an apple and reading a copy of Comic Cuts. The driver called out “Groceries.” A servant opened the door and said, “All right, it’s here.” The boy took a basket into the house through the back door.’ He went silent for a moment, glaring at the sergeant. ‘Shortly after that, the delivery boy reappeared with an empty basket, returned to the van and it drove away.’

‘The delivery boy who came out was Lilian Lenton in disguise?’ Harper asked.

‘Yes,’ Cartwright said through clenched teeth. ‘That’s what we’ve managed to discover. I talked to the grocer. He told me everything as soon as I threatened him with prosecution. Miss Lenton was taken a mile away to—’ he consulted his notebook ‘—Moortown, where her friends had a taxi waiting to drive her to Harrogate. We’re pursuing our enquiries from there. At this point we have every reason to believe she’s fled the country.’

‘Yes, sir, it does.’ Cartwright was staring daggers, but he had to sit and take it. His men had messed up. They’d allowed the woman to escape as they sat and watched. ‘You can help us, if you’d be so good.’ He looked as though they were the hardest words he’d ever had to speak.

‘What do you need?’ Harper asked.

‘If you could ask the force in Harrogate to talk to people they know and discover where she’s gone, that would be a great help. The sooner we can find out the better, of course.’

Before they could leave, the chief said: ‘A word to the wise, Inspector. I’d advise you not to prosecute the grocer. If this comes out in court, you’ll look an utter fool.’

11 thoughts on “The Bold Escape Of The Suffragette”